In a wealthy country like Australia, a time with no government schools seems unimaginable. But back in the 1840s, when the Sisters of Mercy opened the first seconadary school in Western Australia, there were only a few tiny private schools. Many children, particularly girls, received no formal education.

Women religious, or nuns, made education more accessible. Their way of life also offered one of few leadership opportunities for women.

Historians have documented part of this story, but there is a way to go. In a country enamoured with egalitarianism, the lives of women religious speak of the broader historical reality of inequality.

Where did these women come from?

Religious orders consist of people living apart from society but as a community in accordance with the spiritual rule of their founder. Catherine McAuley (1778-1841) founded the Sisters of Mercy in Dublin when she opened the first House of Mercy dedicated to serving the poor, sick and uneducated.

Catherine’s approach to assisting Ireland’s burgeoning poor was radical. The community consisted of two classes of sisters. Choir sisters were educated, middle-class women and generally served as teachers. Lay sisters were poor and working class and operated the kitchen or laundry.

Ursula Frayne (1816-1885), who opened the first secondary school in Western Australia as well as schools in Victoria in the mid-19th century, had trained with McAuley. In 1845 Bishop John Brady visited the sisters’ Dublin convent and requested the mother superior send six sisters to Western Australia with Frayne as the leader.

While sailing to Western Australia aboard The Elizabeth, a member of the missionary group travelling with Bishop Brady was a young French monk, Leandre Fonteinne, who ominously noted:

“His Lordship is only concerned […] for the six women religious that he is bringing along with us. They are and for quite a number of years to come will be a burden to the mission.”

What did they do in Australia?

After arriving in Perth, in 1846 the sisters became the first female religious teaching order to establish a school in Australia. Having navigated sectarism in Ireland, they decided to offer a general education to all Christians. The sisters prioritised Aboriginal people, immigrant Irish orphan girls, the poor and the uneducated. The sisters established a fee-paying school, benevolent institution and Western Australia’s first high school.

Coming from a prosperous Dublin family, Frayne was class-conscious but the distinction between choir and lay nuns was unsustainable in colonial Perth. Relying on the bishop was not an option that would allow them to progress their enterprise.

For these women to be self-sufficient, everyone had to do domestic duties. Frayne herself became a baker.

Although Bishop Brady promised financial support, in 1850 Frayne travelled to Colombo, Malta, Rome, Florence, Paris, England and Ireland to raise funds. In March 1851, she returned to Perth with £450. She gave £157 to the bishop, who was broke.

By 1853 the nuns could afford a new £800 school building. As the sisters’ workload increased, they applied to Dublin for “strong” lay sisters.

Two of the longest-serving lay sisters sent from Dublin were Catherine O’Reilly and Catherine Strahan. O’Reilly filled multiple roles, including carpenter. She was eventually promoted to choir sister and helped to establish schools at locations such as Geraldton.

Strahan’s trajectory was different. Strahan was a lay sister at 30 and provided essential services to the convent kitchen and laundry until she died at 67.

In 1857, Frayne moved to Melbourne to establish a new school as Brady’s replacement as bishop, Joseph Serra, frequently interfered in the order’s leadership. Frayne felt much of his interference unneccessary. Such interference peaked in Queensland, where the Sisters of Mercy had established the state’s first secondary school for girls. The local bishop withheld part of their government salary and exposed them to undernourishment and an early death. 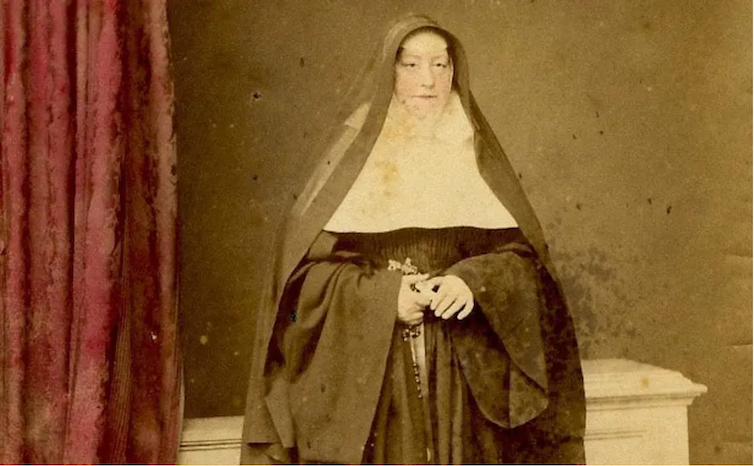 Ursula Frayne was a pioneer of education in both Perth and Melbourne.

Women religious operated significant educational enterprises. Historian Stephanie Burley considers female Irish teaching orders as an empire within the British Empire. Their classes bridged the political, religious and cultural norms of the Irish Catholic Church and the British Empire, acting as a pacifying force between the two spheres.

“Unfortunately, historians have too often seen these women as an undifferentiated mass, undeniably important yet curiously anonymous. Yet [they] were not merely the passive transmitters of male ideas or initiatives.”

As a leader, Frayne has been the subject of biographies. However, Catherine O’Reilly and Catherine Strahan remained cloistered.

The women who laboured in domestic roles in religious communities deserve greater attention. Although historians are increasingly showing interest in the broader role of women religious in Australian society, aspects of their influence remain opaque.

Stress is common among teachers, and recent reports suggest it’s getting worse. We need to understand the sources of this stress to improve support for teachers. Growing teacher shortages in Australia underscore the need for this support. It is also important to identify whether there are patterns of stress experienced by individuals and groups of…

One of Labor’s key education pledges is A$50 million to encourage school leavers with an ATAR over 80 to study teaching. This is part of the new government’s plan to “fix teacher shortages”. The teacher shortage in Australia has reached crisis levels. But this must be addressed by improving the working conditions for existing teachers,…