When Labor leader Anthony Albanese couldn’t quote Australia’s unemployment rate in the first week of the election campaign, many said it didn’t matter: the Australian Bureau of Statistics figure was “meaningless”; “fudged”; “manipulated”; and didn’t count all those who had registered for JobSeeker.

The truth is the official measure of unemployment does what it says on the box. It counts those without any work who are available to work and looking for work.

The result of an astonishingly large survey of 26,000 households covering 50,000 people each month, there’s little reason to question its accuracy.

But there are good reasons to question why the bureau does it in the way it does.

“Unemployment” as we have come to understand it is a fairly new concept. 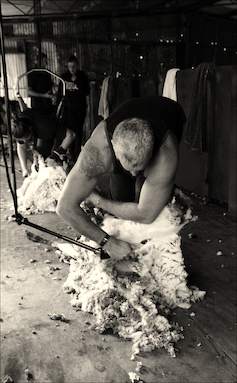 Until the 1900s much work was intermittent. Rachel Claire/Pexels

As I outline in my book, Inventing Unemployment, before the second world war censuses tended to divide the population differently – into breadwinners and dependants.

A breadwinner who wasn’t employed would be recorded as a breadwinner rather than unemployed (with their usual occupation noted).

That’s probably because until the 20th century, irregular work was the norm.

Late-19th-century Sydney had no extensive manufacturing. Work such as wool washing, tanning, meat preserving and loading sea cargo was seasonal and tied to rural rhythms.

Even in more stable occupations, many workers were little more than or sub-contractors or day labourers, their work intermittent.

Unemployment as we know it

The 1947 census introduced three distinct categories: employed, “unemployed” and “not in the labour force”. To be “unemployed” you had to describe yourself as willing and able to work, but without work.

Carried into the quarterly labour force surveys which started in the 1960s and continue monthly to this day, the change enabled the creation of an unemployment rate, which is the number of unemployed divided by the total of the number of employed and unemployed, which is called the “labour force”.

The categorisation made more sense by then as work was becoming full-time and ongoing. Being “unemployed” (workless but in the workforce) had come to be seen as unusual and worthy of government support. The Curtin Labor government introduced unemployment benefits in 1945.

Read more: Memories. In 1961 Labor promised to boost the deficit to fight unemployment. The promise won

The changes were in line with International Labour Organisation recommendations which themselves followed changes in the United States which in 1937 had asked all non-workers who’d expressed a desire to work whether they were able to work and were actively seeking work.

The context was United States President Franklin D Roosevelt’s determination to fight unemployment through job creation schemes. The advantage of the new measures was that they gave a measure of immediate unmet demand for work.

Excluding both those who were unwilling to work at present and those who had any work at all yielded a measure of the minimum number of jobs needed. Policy drove the definition rather than the other way around.

But the definitions were messy. Labour markets confound easy distinctions between working and not working, and there’s no particular degree of desire for work that clearly distinguishes the “unemployed” from “not in the labour force”.

And the idea of the “labour force” summed up fairly stable social categories: men who entered at 15 years and were expected to work or look for work for 50 years, and women who also entered in their mid-teens only to permanently withdraw upon marriage or childbirth.

Not now. As social researcher Monica Threlfall points out, whereas once the labour force was an identifiable category,

When the headline monthly unemployment rate changes, what has moved is often not the numerator – the number of unemployed – but the shape-shifting denominator, which depends on whether people define themselves as looking and available for paid work at the particular time they are asked.

And the main questions don’t pick up underemployment. Australia has one of the largest part-time work forces in the OECD, which is why the Bureau of Statistics also asks workers whether they would like more hours, and reports the answers alongside the unemployment rate.

It also measures “discouraged workers”, people who are available for and wanting work but have given up the search and so aren’t counted as “unemployed”.

The only way to really understand whether we are succeeding or failing in providing paid work is to take all three measures together – unemployment, underemployment and the count of discouraged workers.

Messier by the month

What this total tells us will be quite different to the count of the number of Australians on unemployment benefits.

After tracking each other closely, the number of “unemployed” and the number on unemployment benefits has diverged over the past 25 years and that divergence became even more pronounced during COVID.

Australian experts Peter Whiteford and Bruce Bradbury point out most unemployed people aren’t on benefits, and increasingly unemployment benefits are available to people who are not unemployed.

Read more: How can more people be on unemployment benefits than before COVID, with fewer unemployed Australians? Here’s how

These days unemployment benefits are available to people not seeking paid work but engaged in voluntary work, study, or providing home schooling.

And people who once would not have been considered unemployed – such as single parents and people with disabilities – are now put on unemployment benefits and required to search for work in order to get them.

After holding together for decades, the post-war administrative and legal construction of unemployment is failing us. We’re outgrowing it.

A few weeks before his election victory, Anthony Albanese made an important speech to the Australian Chamber of Commerce and Industry. He talked of “socially inclusive growth – the kind of growth that is only possible with economic reform that lifts productivity”. But how to do it? Albanese’s answer was a good one: greater co-operation.…