Unprecedented forest fires in the drought-stricken western United States. Tropical storms and rising seas threatening the Gulf and Atlantic coasts. Sizzling heat across large swaths of the country. As climate change unfolds before our eyes, what can the U.S. do to sharply and rapidly reduce its share of the greenhouse gas emissions that are causing it?

The Biden administration has committed to reduce those emissions 50% by 2030 below 2005 levels. That’s a critical first step of a global energy transition that must achieve net-zero emissions by midcentury to limit warming to 1.5 degrees Celsius (2.7 F) and thereby avert the worst impacts of climate change.

Twenty years ago, I would have regarded the U.S. 2030 pledge as crazy talk. But a new study in the journal Science that I co-authored, which compares results from six independent analyses conducted by academic, industry and nongovernmental organization researchers, lays out a road map to the 50% target that’s both doable and affordable 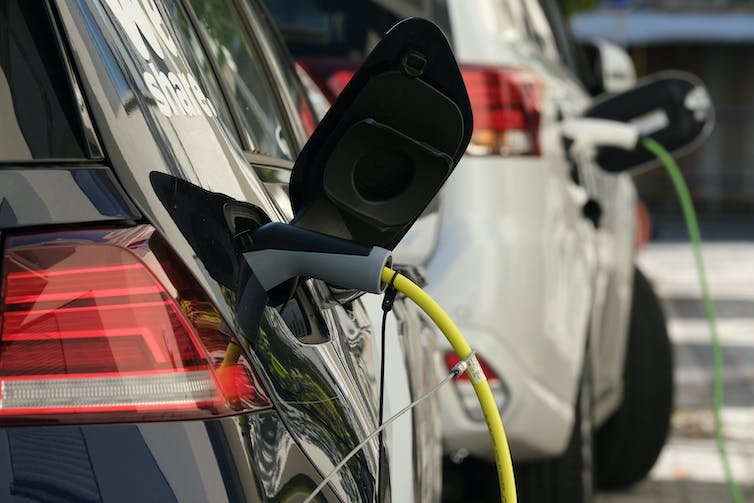 Ramping up renewable energy production is crucial for the shift to electric vehicles to pay off. Sean Gallup/Getty Images

Back then it seemed that without major policy measures, U.S. greenhouse gas emissions would continue to rise indefinitely. However, inexpensive natural gas and falling costs of solar and wind power, combined with some modest state and federal renewable energy programs, resulted in a more than 20% reduction in annual emissions between 2005 and 2020.

With that reduction under our belts, reaching the 2030 target will require a further reduction of about 37% from current levels. That puts the target closer, but it’s still a bigger drop in 10 years than the U.S. achieved over the past 15 years.

Our study shows that by exploiting declining costs of zero- and low-carbon energy sources in a more aggressive and focused way, the U.S. can meet its target within eight years – all while substantially reducing its dependence on fossil fuels, including high-priced gasoline, and cutting back the air pollution, climate and health impacts resulting from their combustion.

A new road map for the US energy transition

While there are differences among the six analyses in our study, all find that most of the needed emissions reductions – about 70% to 90% – can come from the electric power and transportation sectors. These can be achieved through a further transition to solar and wind power as costs for those technologies continue to drop.

Solar and wind can’t do it all; we found that natural gas – some of it accompanied by technology that captures the carbon emissions released during its combustion – and nuclear power and hydropower can play supporting roles.

Much of the needed emissions reductions – about 10% to 25% – can be achieved through a rapid transition to electric light-duty vehicles along with additional reductions from freight transportation. Our study shows that electric vehicles, which accounted for about 4% of new car sales in the U.S. in 2021, would need to rise to between 34% and 100% of sales by 2030 to meet that target. That’s a huge jump. But it now appears that battery costs have fallen enough to allow production of EVs at a cost equivalent to that of conventional vehicles. Moreover, EVs are typically cheaper to operate and maintain, further reducing total ownership costs.

While our study finds that most of the needed emission reductions can come from electric power and transportation, other sectors of the economy – including industry, agriculture and buildings – must also shift to low- and zero-carbon energy sources to meet the 2030 goal. The key challenges for these sectors include developing technology to eliminate emissions from energy-intensive processes, such as chemical, iron and steel production, and retrofitting existing homes and businesses with electric heat pumps in a timely manner.

That’s a lot to accomplish in just eight years. It will require an unprecedented buildout of electric power production and transmission capacity, a rapid ramp-up of electric vehicle production and sales, and a nationwide deployment of EV recharging stations.

At the same time, by helping to avoid the worst effects of climate change, implementing this road map would reduce the national cost of damage from climate change while encouraging innovation. And significantly reducing air pollution resulting from fossil fuel combustion would also reduce related health costs.

For example, the smog produced by fossil fuel combustion exacerbates asthma and related respiratory diseases, leading to premature deaths. Some of the six analyses we reviewed found that the reduction in premature deaths – which equate to lost productivity and additional health costs – from reduced fine particulates in the air was by itself enough to offset the cost of implementing the U.S. energy transition road map described in the study.

Given the scale and pace of the transformations needed to reach the U.S. 2030 climate target, action must be taken immediately and sustained throughout the decade to succeed. Many states have already made strong commitments and implemented policies to achieve them, but a coordinated national strategy is needed.

The six analyses we reviewed assume different combinations of strategies, including tax incentives, subsidies, regulations and carbon pricing. Each approach has its pluses and minuses, but any successful policy must focus on affordable and equitable solutions and recognize that one size does not fit all. For example, transportation solutions in rural areas will likely differ from those appropriate in dense urban areas, and new construction may sometimes be more cost-effective than retrofitting older buildings.

The Biden administration’s proposed way forward, the Build Back Better plan targeting funding to help communities build resilience to the impacts of climate change and expand clean energy, is stalled in Congress. Meanwhile, the clock is ticking.

The Biden administration announced it was putting a two-year freeze on the threat of new solar tariffs, throwing a lifeline to U.S. solar installers – and boosting the country’s ability to meet its climate goals. The tariff threat involved imported solar panels and components from four Asian countries that supply about 80% of photovoltaic cells…