The Biden administration announced it was putting a two-year freeze on the threat of new solar tariffs, throwing a lifeline to U.S. solar installers – and boosting the country’s ability to meet its climate goals.

The tariff threat involved imported solar panels and components from four Asian countries that supply about 80% of photovoltaic cells and modules used in the U.S. The administration also announced new plans on June 6, 2022, to use the Defense Production Act to help industries ramp up production of solar panels in the U.S. and give U.S. solar manufacturers other incentives through federal purchasing.

We asked energy researcher Emily Beagle to explain the changes and the impact they could have.

Part of President Joe Biden’s announcement is aimed at boosting US solar manufacturing. How large is that part of the industry today?

Most of the rest of the U.S. solar workforce, 67% of it, worked in installation and development. And most of the cheap solar cells in the panels they installed came from Asia – specifically, about 80% of solar panel imports came from the four Asian countries addressed in Biden’s order.

What effect did the threat of new tariffs have on solar installations and Biden’s climate goals more broadly?

The first silicon solar cells were developed at Bell Labs in the U.S. in the 1940s and 1950s, and the U.S. was an early manufacturing leader. But overseas competition and differing energy and research priorities and policies drove much of the industry out. China has dominated solar manufacturing for the past decade. 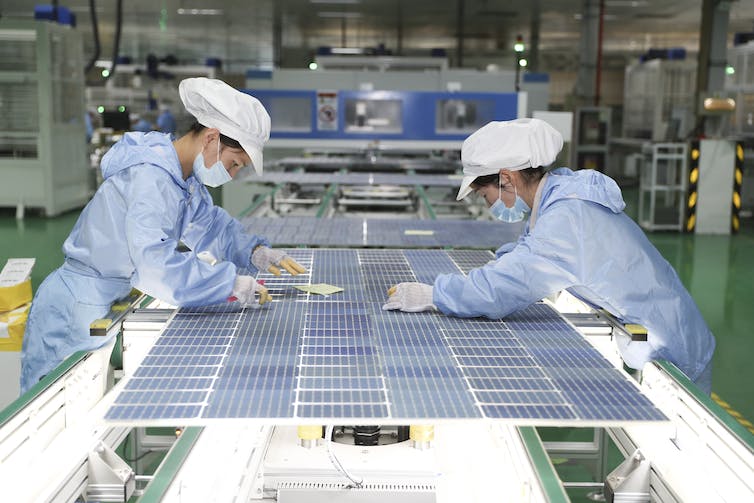 In recent years, the federal government has put tariffs on solar imports to try to boost growth of U.S. manufacturing. The tariffs raised some prices but didn’t stop the growth of solar installations. Then the U.S. Commerce Department announced in March 2022, that it had opened an investigation into solar imports from Cambodia, Malaysia, Thailand and Vietnam. The issue was whether solar components from China – which faced tariffs – were being routed through those countries. If the investigation led to new tariffs, the Commerce Department could make them retroactive, significantly raising the cost for U.S. buyers.

That threat cut the U.S. solar installation forecasts for 2022 and 2023 by 46%, according to the Solar Energy Industries Association.

Over 300 projects have been delayed or canceled since the case was brought forward. These canceled or delayed projects account for 51 gigawatts of solar capacity and 6 gigawatt-hours of attached battery storage capacity. That would be more than double all the solar capacity installed in the U.S. in 2021, which was 23.6 gigawatts.

Rapid installation of solar power to reduce emissions from the electricity sector is a key pillar of the Biden administration’s climate goals. To stay aligned with the administration’s climate target of reducing emissions 50%-52% by 2030, the U.S. needs to install about 25 gigawatts of new solar capacity each year for the next decade. Imposing tariffs could cause solar capacity to reach only 70%-80% of that goal.

Can Biden’s order to use the Defense Production Act and provide other support give US manufacturing enough of a boost to succeed?

Biden’s order does several important things to address the threat to the U.S. solar industry and expand other critical technologies to meet the administration’s climate goals.

This is important for the Biden administration’s climate goals because it will help ensure that the U.S. has the solar components it needs in the immediate term to continue building out new solar capacity while domestic production ramps up.

The president is also authorizing use of the Defense Production Act not only to expand U.S. domestic manufacturing of solar panel components, but also to boost several other critical climate technologies, including building insulation, heat pumps, clean hydrogen and power grid infrastructure. 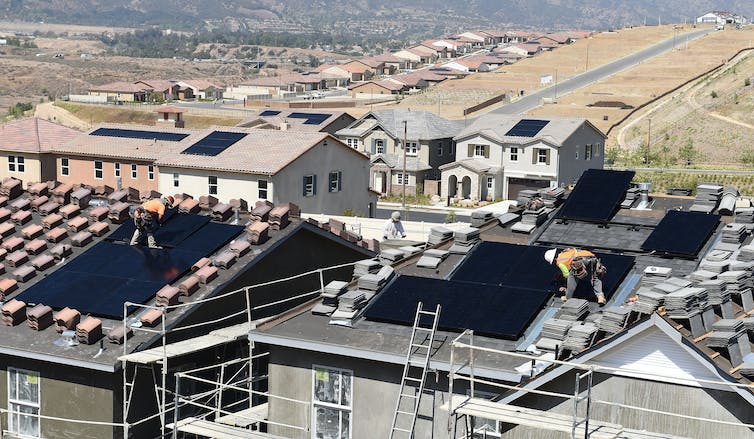 California now requires most new homes to be solar-ready, but the cost of the system and how soon it will pay off is an important concern. Will Lester/Inland Valley Daily Bulletin via Getty Images

Another important part of that order is the use of federal procurement provisions to give U.S. solar manufacturers a market.

Federal procurement provisions, such as Buy American, use the vast purchasing power of the federal government to create demand for U.S. manufactured goods. The procurement provisions in Biden’s order, including master supply agreements and “super preferences,” will provide certainty and a guaranteed buyer – the federal government – for new solar products manufactured here in the U.S.

While a step in the right direction, whether the new efforts will be able to build up the U.S. solar manufacturing industry and make it competitive remains to be seen. The greatest potential impact to address not only challenges in the solar industry but U.S. climate goals more broadly lies with Congress, which could still pass historic climate legislation.