One factor many parents consider is their child’s age when starting kindergarten, based on how close their age is to the cutoff date for enrollment. The ages at which kids are eligible to start kindergarten differ across the United States and in other countries. Most commonly in the U.S., a child who turns 5 on or before Sept. 1 of a given year can start kindergarten that year. But most states don’t actually require a child to start school until later, even age 7 or 8.

Evidence shows that children who are relatively young for their kindergarten class – those who are only a few weeks or months older than the cutoff rules require – are at increased risk for doing worse in school, being held back a grade, and having lower social-emotional skills.

Students who start kindergarten younger are also more likely to be rated by teachers as exhibiting symptoms of attention-deficit/hyperactivity disorder in kindergarten and to be treated with medication for ADHD.

When younger kids fare worse than older kids in the same, single-grade classroom, and older kids are viewed as more advanced, it’s often because adults tend to compare children to one another. The relatively older children may appear to behave better than the relatively younger children, especially as kindergarten classrooms focus more on academics and offer less time to play. Together these differences are called the “relative age effect.”

As a result, some families choose to delay their child’s entry into kindergarten, particularly those who can afford to do so.

I am a clinical psychologist who studies how to best support children in school settings, particularly those at risk for behavioral challenges like ADHD. Here are five ways families can help support their kindergartners, especially those who are relatively younger than their classmates.

Relatively older students have had more time to learn academic skills. To help younger kindergartners catch up with their older classroom peers, families can offer additional learning experiences. This includes engaging the children in more conversations and shared book reading. This can be started during the preschool years and throughout kindergarten.

Parents and educators can direct focus as much as possible on encouraging and praising the positive performance of relatively younger children in the classroom. If the feedback is mostly negative – in which the relatively younger child is always told to “hurry up,” “pay attention,” “do it the right way,” and all other variations of directives that include words like “no,” “don’t” or “stop” – they may eventually shut down and stop trying to follow instructions. To combat this, educators and parents can focus on emphasizing all the things the child is doing right, rather than wrong. A good goal is to be mindful of directing at least three positive statements to the child for every correction or redirection. 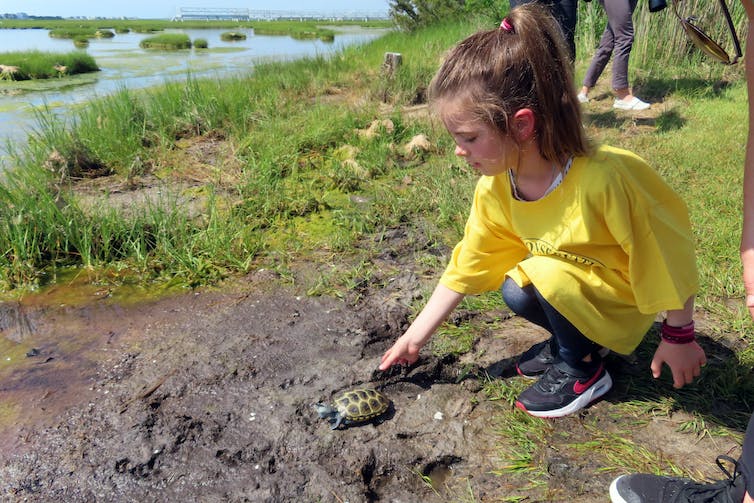 A New Jersey kindergartner releases a turtle into the wild after it was raised from an egg when its mother was struck and killed by a car. AP Photo/Wayne Parry

Parents of relatively younger children can meet with their child’s teacher early in the school year to discuss individual goals for the child. That meeting can discuss the child’s current strengths and skills, as well as areas in need of growth. The adults can establish reasonable, achievable goals for the child each week or month. That can help offset possible relative comparisons that may mask individual progress.

To follow up with the goals set at the beginning of the year, a daily or weekly check-in on behavioral or academic progress can help parents and teachers work best together. Waiting until the end of the school year is too long and leaves no time to change course if goals need to be modified. Frequent check-ins also provide opportunities to reward and praise the child for success.

Educators and parents may find it useful to remember that kindergarten is only one year of what is almost two decades of education for children on a college track – and age differences matter less and less in academic performance as children get older.