The Federal Reserve on June 15, 2022, lifted interest rates by 0.75 percentage point, the third hike this year and the largest since 1994. The move is aimed at countering the fastest pace of inflation in over 40 years.

Wall Street had been expecting a half-point increase, but the latest consumer prices report released on June 10 prompted the Fed to take a more drastic measure. The big risk, however, is that higher rates will push the economy into a recession, a fear aptly expressed by the recent plunge in the S&P 500 stock index, which is down over 20% from its peak in January, making it a “bear market.”

What does this all mean? We asked Brian Blank, a finance scholar who studies how businesses adapt and handle economic downturns, to explain what the Fed is trying to do, whether it can succeed and what it means for you.

The Federal Open Market Committee, the Fed’s policymaking arm, had been pondering how much and how quickly to raise its benchmark interest rate over the coming months to fight inflation. The stakes for the U.S. economy, consumers and businesses are very high.

Only a week ago, the Fed had been expected to raise rates by 0.5 percentage point at the latest meeting. But markets and Wall Street economists began to expect the larger 0.75-point hike after the May consumer price data suggested inflation has been unexpectedly stubborn. Some Wall Street analysts even argued a 1-percentage-point hike was possible.

The prospect of a faster pace of rate hikes due to inflation has prompted financial markets to plunge by over 6% since the June 10 report. Investors worry the Fed may slow the economy too much in its fight to reduce inflation, which if left unchecked also poses serious problems for consumers and companies. A recent poll found that inflation is the biggest problem Americans believe the U.S. is facing right now.

2. What is the Fed trying to achieve?

The Federal Reserve has a dual mandate to maximize employment while keeping prices stable.

To do this, the Fed sets short-term interest rates, which in turn help it influence long-term rates. For example, when the Fed lifts its target short-term rate, that increases borrowing costs for banks, which in turn pass those higher costs on to consumers and businesses in the form of higher rates on long-term loans for houses and cars.

At the moment, the economy is quite strong, unemployment is low, and the Fed is able to focus primarily on reducing inflation. The problem is, inflation is so high, at an annualized rate of 8.6%, that bringing it down may require the highest interest rates in decades, which could weaken the economy substantially.

And so the Fed is trying to execute a so-called soft landing. 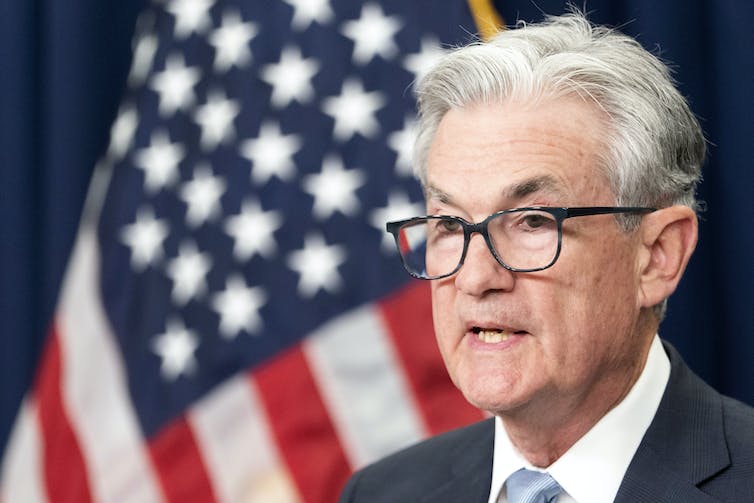 A soft landing refers to the way that the Fed is attempting to slow inflation – and therefore economic growth – without causing a recession.

In order to stabilize prices while not hurting employment, the Fed expects to increase interest rates very rapidly in the coming months. Including the latest rate hike, the Fed has already lifted rates by 1.5 percentage points this year, putting its benchmark interest rate at a range of 1.5% to 1.75%.

Historically, when the Fed has had to raise rates quickly, economic downturns have been difficult to avoid. Can it manage a soft landing this time? Fed Chair Jerome Powell has insisted that the central bank’s policy tools have become more effective since its last inflation fight in the 1980s, making it possible this time to stick the landing. Many economists and other observers remain uncertain. And a recent survey of economists notes that many anticipate a recession beginning next year.

That said, the economy is still relatively strong, and I’d say the the odds of a recession beginning next year are still probably close to a coin flip.

4. Is there any way to tell what the Fed might do next?

Each time the Federal Open Market Committee meets, it seeks to communicate what it plans to do in the future to help financial markets know what to expect so they aren’t taken by surprise.

One piece of guidance about the future that the committee provides is a series of dots, with each point representing a particular member’s expectation for interest rates at different points in time. This “dot plot” previously indicated that the Fed will raise interest rates to 2% by the end of the year and close to 3% by the end of 2023.

The latest inflation news is forcing it to change its tune. The dot plot now suggests the Fed expects rates to near 3.5% by December – implying several large rate hikes are still in store this year – and almost 4% in 2023 before falling again in 2024.

Long-term interest rates, such as U.S. Treasury yields and mortgage rates, already reflect these rapid changes. Some investors, however, think the Fed may have to move even faster and are forecasting rates approaching 4% by the end of 2022.

5. What does this mean for consumers and the economy?

Interest rates represent the cost of borrowing, so when the Fed raises the target rate, money becomes more expensive to borrow.

First, banks pay more to borrow money, but then they charge individuals and businesses more interest as well, which is why mortgage rates rise accordingly. This is one reason mortgage payments have been rising so rapidly in 2022, even as housing markets and prices start to slow down.

When interest rates are higher, fewer people can afford homes and fewer businesses can afford to invest in a new factory and hire more workers. As a result, higher interest rates can slow down the growth rate of the economy overall, while also curbing inflation.

And this isn’t an issue affecting just Americans. Higher interest rates in the U.S. can have similar impacts on the global economy, whether by driving up their borrowing costs or increasing the value of the dollar, which makes it more expensive to purchase U.S. goods.

But what it ultimately means for consumers and everyone else will depend on whether the pace of inflation slows as much and as quickly as the Fed has been forecasting.

This article was updated to include results of FOMC interest rates announcement.

Inflation surged at the fastest pace in over 40 years in May 2022, pushing the Federal Reserve toward a more aggressive pace of interest rate increases to slow it down. While there’s concern it could cause unemployment to spike, a little-known economics indicator suggests the Fed can do so without causing too much economic pain.…

Treasurer Jim Chalmers is about to commission an independent review of the Reserve Bank of Australia. Refreshingly, his election promise was bipartisan – both sides of politics want it. What we don’t know yet is who will conduct the inquiry and what it will look at. In something of a cultural cringe, 12 leading Australian…

When Labor leader Anthony Albanese couldn’t quote Australia’s unemployment rate in the first week of the election campaign, many said it didn’t matter: the Australian Bureau of Statistics figure was “meaningless”; “fudged”; “manipulated”; and didn’t count all those who had registered for JobSeeker. The truth is the official measure of unemployment does what it says…